Welcome to NSR 125, this is a fan and sales site for anyone with an interest in the classic NSR 125.

Following the success of the NS125 (an earlier model to the NSR), the NSR125 JC20 was designed and assembled by Honda Italia Industriale S.p.A. in Rome, Italy. Grimeca was contracted to produce the aluminium cast frame (2-piece, die-cast, bolt together construction), wheels and brake assemblies. The engine was manufactured by Girardoni with Dell’Orto supplying the carburetor. Marzochi supplied forks and suspension while Pagani provided instrumentation and lighting. The Grimeca rear wheel was 18 inch in diameter, while the front was 17 inch and shod in Pirelli MT-45 tires.

The NSR125 JC22 is mostly of Japanese manufacturing, with the engine parts and other key elements of the running of the motorbike produced in Japan, it was then assembled in Italy and supplied to its mainly European market. Design changes saw the JC22 to receive a steel fuel tank and visual trim resembling the NR750.

Although it is a common mistake to believe the NSR continued production until 2003. This is not the case as they ceased production in 2001 but had leftover stock until 2003/5.

The NS125 which was available as an “F” naked, or “R” fully faired is commonly mistaken as an NSR of earlier production, although shares no real parts or design similarities. This model is most easily identifiable by its singular square headlight, rather than the earlier NSR’s dual round headlights or the later NSR’s “foxeye” design. 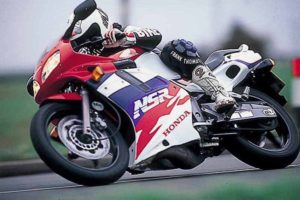